Defendant Work: Girl In The Dark

A case for plagiarism was brought by production music library Mood Music against one of its competitors De Wolfe Music. Mood Music sent a letter to De Wolfe in March 1967, objecting to their release of the track Girl In The Dark, composed by Jack Trombey (one of the pseudonyms used by Dutch composer Jan Stoeckart). Mood Music contested that Girl infringed the copyright in their track Sogno Nostalgico by the Italian composer Armando Sciascia, the rights to which they had acquired in 1964.

De Wolfe’s lawyers responded by letter that any similarity to Girl was coincidental, and that they had taken assignment of rights to the track in 1966. Mood Music followed their first objection with a second letter and writ in 1970 requesting an injunction to stop De Wolfe from distributing alleged infringing copies of the track.

Mood Music’s initial claim was simply that the De Wolfe track copied their song and infringed their copyright; it looked and sounded the same.

At the 1975 retrial Mood Music sought to bring additional evidence in the form of three other musical works released by De Wolfe and composed by Jack Trombey, which they contested also infringed existing musical copyrights. One of these was what is known as a ‘trap order’ – a track commissioned by Mood Music to copy one of their existing copyrights. This commission was proposed to De Wolfe indirectly by a Mr Shillingford using a Mood track called Fixed Idea, supplied with the information that it had been recorded from a US television broadcast. The other two examples supplied by Mood Music were of close copies of original compositions by Elgar and Sibelius, both of whom were still then protected by copyright.

De Wolfe objected by interlocutory appeal to the legitimacy of the additional evidence, but Lord Justice Denning allowed its admission, as long as it was “logically relevant in determining the matter which is in issue”, and “only where its probative value was so strong that justice required its admission”.

De Wolfe’s initial response to Mood Music’s original 1967 letter stated in writing that any similarity to Girl was coincidental, and that they had taken assignment of rights to the track in 1966.

Following a second letter from Mood Music in 1970 De Wolfe responded repeating their interpretation that the similarity was coincidental, and that they would also contest the injunction on the grounds of acquiescence and delay by the claimant in further action, this being three years since the first letter.

At the original 1973 trial De Wolfe claimed that they had, in fact, released their track first in 1960, therefore pre-dating the release of the Mood Music track.

The real essence of Sogno is captured in the first eight bars of its melody, and these notes are reproduced exactly, with almost identical rhythms and harmonic accompaniment, in Girl. Where the chords are not identical, they are still closely related. The sombre, melancholy, minor-key melody of both works makes a feature of the chord known as the 9th, which adds the second note of the minor scale to the root chord – a common feature of popular and jazz music. The opening phrase is extended by repeating in Girl before being developed over the following eight bars.

Although melodically Girl moves further away from Sogno in bars 18 – 26, the melodic shapes and rhythms still mirror those of the second section (bars 11–17) of Sogno. 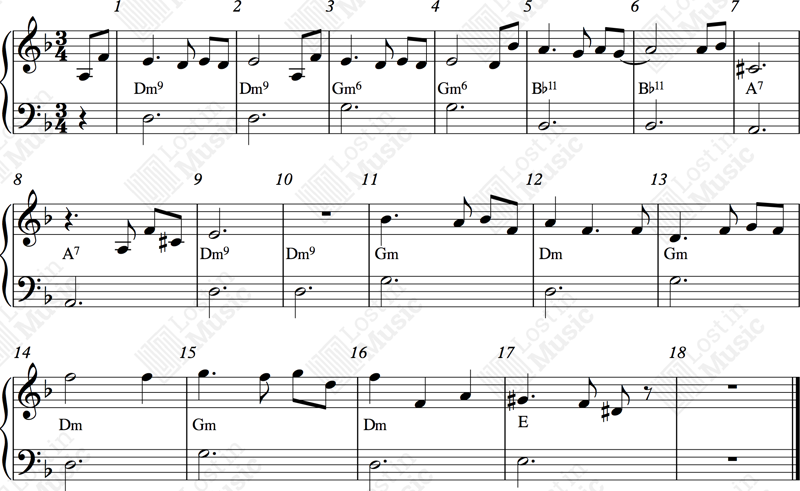 Girl In The Dark 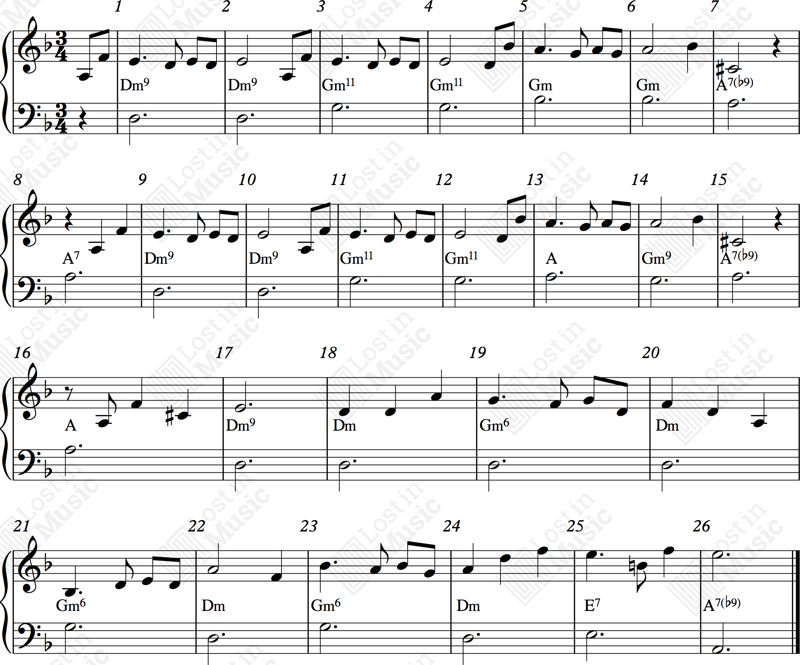 The appeal was dismissed and the action settled, in which De Wolfe assigned the worldwide copyright of Girl to Mood Music and additionally paid royalties previously earned by the song. De Wolfe paid all costs, estimated at £70,000, but did not admit liability. The case was groundbreaking in allowing “similar fact” evidence in a civil copyright case, where previously it had only been occasionally admissible in criminal cases.

Lord Justice Denning, in summarising the ruling, said, “in infringement of copyright fraud is not an essential ingredient. Reproduction without the owner’s consent is enough. Even subconscious copying is an infringement.”

This case also raises the question of ethics. Whereas the Austin case covered similar arrangement of public domain material by different musicians, this is the first to prove blatant infringement of a composer’s protected original material. It would have been an embarrassment to the publisher De Wolfe in an industry where integrity is central. One wonders whether the composer felt some protection was afforded to him by writing under a pseudonym, but he too must have been embarrassed by the exposure of such a level of clear cut intellectual property theft.

This was the first successful UK finding for plagiarism in music, and the lack of precedent is perhaps why De Wolfe chose to contest it so strongly. There can be little doubt that a case such as this would now be settled out of court, but in 1970 the similarity of one musical work to another had not closely been considered in UK courts. De Wolfe must have believed that their defence of coincidence would hold good.

I am surprised by your description of this claim as being one of plagiarism rather than infringement of copyright. Plagiarism is not a legal concept but an ethical one - falsely claiming credit for a work you have not authored. For example if I claimed I had composed Beethoven's No 9 symphony I am a plagiarist but I have not infringed copyright as the work is now public domain. Whereas if I reproduce and distribute pirate copies of Adele's album 19 - keeping the original credits - then I am infringing her copyright and numerous others, but not plagiarising anyone.