You Be The Judge

Example Case - See You In Court

In this case study you get to play musicologist and judge, and decide at what point a piece of music becomes infringing. Over five evolving versions we gradually introduce elements of an existing song into a new composition. Read the commentary, listen to the examples and then vote! There’s necessarily a lot of music detail here, but you can skip the arguments and head for the Musical Evidence if you just want to listen.

The first version of the song is entirely original. It emulates the chord structure and tempo of an existing pop song, but its melody, lyrics and accompaniment are original. The existing song is in A major, with four beats in a bar and a tempo of 103 beats per minute.

The chord sequence of the existing song is copied below, the end of each bar being indicated with the symbol /, and minor key chords indicated by a lower case letter m:

The first question to address is whether the chord sequence in itself is a copyright work. Some common chord progressions are patently unprotectable, such as the 12-bar blues progression, or the commonplace I V iv IV progression (used in the settled Ed Sheeran case) which has been highlighted to great effect by Australian musicians The Axis of Awesome. To use an example from The Beatles, the chord sequence C G Am F in the verse of Let It Be is unprotectable by itself, but when the melody and lyrics are added then the expression of the idea becomes protectable.

The protectability of a sequence of chords was one consideration in Malmstedt v EMI, where five of nine chords in the chorus were found to coincide (after transposition of one song to match the other). Nonetheless it was agreed that these chords were commonplace, and therefore the coincidence did not constitute infringement.

Although many of the chords in the existing song are common, it could be argued that some degree of originality is achieved by the chords at the start of the second half of the chorus, where keys of C# major and B major are introduced. These chords fall outside of the main related chords of A major, and stand out as sonically ‘new’ within the context of the song. The reason that these chords are aurally striking is that the third note of each chord is not found in the A major scale, and therefore has not been heard in the song to that point. The third note of C# major is E#, which is one semitone (or half note) sharper than E natural, the fifth note of the A major scale. The third note of B major is D#, which is one semitone sharper than D natural, the fourth note of the A major scale.

For all chords in a song of 36 bars to agree is undoubtedly more than coincidence. No defence can be made that the entire sequence of 36 bars is commonplace, and it has not been possible to find other songs that concur entirely with this sequence. The question would then be whether the chord sequence in itself forms a substantial part of the song.

A chord sequence can be seen as the blocks on which a musical work is built, in the same way that a two-dimensional floor plan is the start of a building’s design, or the plot is the genesis of a book. These are ideas that are unprotectable by law. The expression of the ideas is the addition of melodies, bass lines, percussion and lyrics, and this is the protectable part of the existing song. It is therefore proposed that no infringement of copyright is made by version of the new song. The replication of an entire chord sequence could, however, add weight to other coincidental elements in an infringement claim.

It can be seen by a glance at the chords from the verses (see above) that all sixteen bars comprise just four different chords: the major chords A, D and E, and the minor chord F#. All of these are closely related to A major, and can be considered commonplace in Western music. The same can be said for the first half of the chorus, which alternates chords of A and D major.

See You In Court

(Simon Anderson) ©and ℗ 2015, Simon Anderson. Please note that copyright is only claimed in the original elements of See You In Court, and not in the elements that have been reproduced from the existing song for the purposes of this case study. 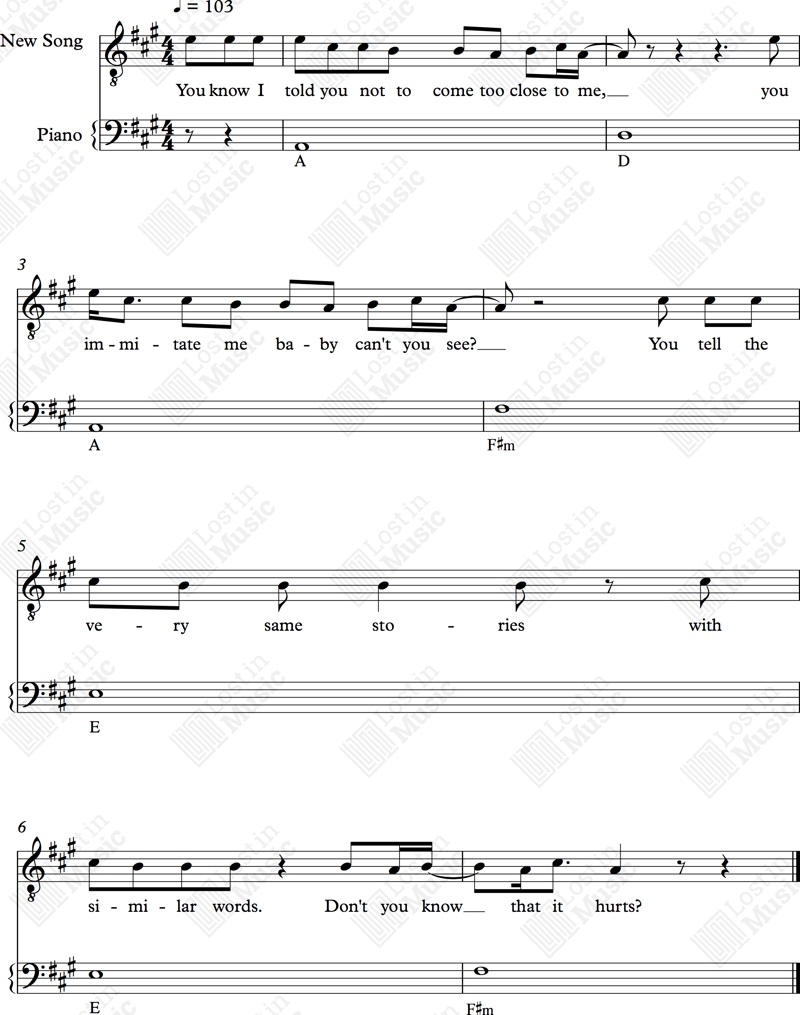 Let us know your thoughts on this You Be The Judge case. To add your comments you will require an account. Please either Login or Register.