Carey and Golden vs Sheeran, Hill, McGraw and others

Claimant Work: When I Found You

Defendant Work: The Rest Of Our Life

Ed Sheeran, as co-writer of a song for Tim McGraw and Faith Hill, has been named as a defendant on 10 January 2018 in a new case to emerge, claiming copyright infringement of the country music duet The Rest Of Our Life against Jasmine Rae's 2015 song When I Found You.

Australian singer-songwriter Jasmine Rae wrote the song When I Found You in 2014 and it was first released on her album Heartbeat in 2015. In 2016 it was released as a single, and the video reached number 1 on the Australian country video chart. When I Found You was co-written by Rae (using her surname Eldridge), with Australian keyboard player Beau Golden and musician and producer Sean Carey, former guitarist with the band Thirsty Merc.

A fan alerted Jasmine Rae to the similarity between the two songs, and she played them to Golden and Carey in December 2017 who decided to take legal advice. The case was complicated by the fact that Jasmine Rae's boyfriend Tim Holland works for Sony Music Entertainment, and had been aware of the similarities between the two songs. Sony was the Nashville record label that released The Rest Of Our Life and was named as a defendant in this action. Jasmine Rae decided on 21 December not to take part in any legal action against Sony Music, stating in an email that she would

"not participate in any legal action of any kind against the song’s recording artists . . . the owner of the recorded track master . . . or their record company, Sony Music Entertainment . . . [she would] not take this action on moral grounds . . . [and not] be part of any action that defames, courses (sic) distress, causes embarrassment or damages relationships between people and organisations (sic) who have done nothing wrong . . . my partner Tim works for Sony Music Entertainment and has overseen the marketing for ‘The Rest of our Life’ in Australia. He works directly with the Tim and Faith label team in Nashville. Taking such action would compromise both his position and that of the people he reports to and this is not something I’m prepared to do."

On 10 January 2018 The Hollywood Reporter revealed that a lawsuit had been served on the writers and performers of The Rest Of Our Life, claiming "willful copyright infringement" on behalf of the other two writers of When I Found You, Sean Carey and Beau Golden.

The court papers list the four writers of The Rest Of Our Life, along with their publishers, the performers Tim McGraw and Faith Hill and their record labels as defendants, a total of 15 different individuals and entities. They claim "in many instances, verbatim, note-for-note copying of important and original elements of [When I Found You]".

The claim was for $5m based on an estimate of the revenues earned by The Rest Of Our Life since its release, with both single and album scoring big hits in the USA, live performances and television broadcasts.

In November 2018 it was reported that the case had settled. No subsequent changes were made to the royalty shares of The Rest Of Our Life, suggesting that the settlement had been a cash payment, the terms of which remain confidential.

The case put forward on behalf of Carey and Golden highlights the similarities at the start of the songs, stating that they are "compositionally vital to the overall mood and musical context of both works". The papers put forward the following arguments in favour of infringement:

Although the opening piano material is similar, the descending notes of the major scale are very common in music, in this case using the first three notes in reverse order: 3, 2, 1. The opening melody of the first two phrases follows this descending pattern moving down from F# to E and D. The chords move from the tonic key of D to the subdominant key of G and back - a well-used harmonic device in musical "scene setting".

The opening chords of The Rest Of Our Life do not exactly match those of When I Found You, as is claimed in the court papers (para. 65):

The second and third chords of The Rest Of Our Life are straight G chords, without the added 9 (the effect of the 9 is to add colour with the addition of the note A to the G chord, the second or ninth note above the root G).

After the first two phrases the songs move apart harmonically, with The Rest Of Our Life introducing the new chord of B minor in bar 10. The chords, melody and lyrics of the chorus, bridge and middle eight sections bear no coincidence between the two songs.

The complaint on behalf of Carey and Golden concentrates on the first nine bars (or first two lines) of the extracts below. There is a visible similarity between the first two bars of piano accompaniment, and the melody line follows the same descending shape in its first two phrases.

Owing to the freedom of style in the singing of both songs it is hard to reproduce exactly in music notation what is sung.

When I Found You 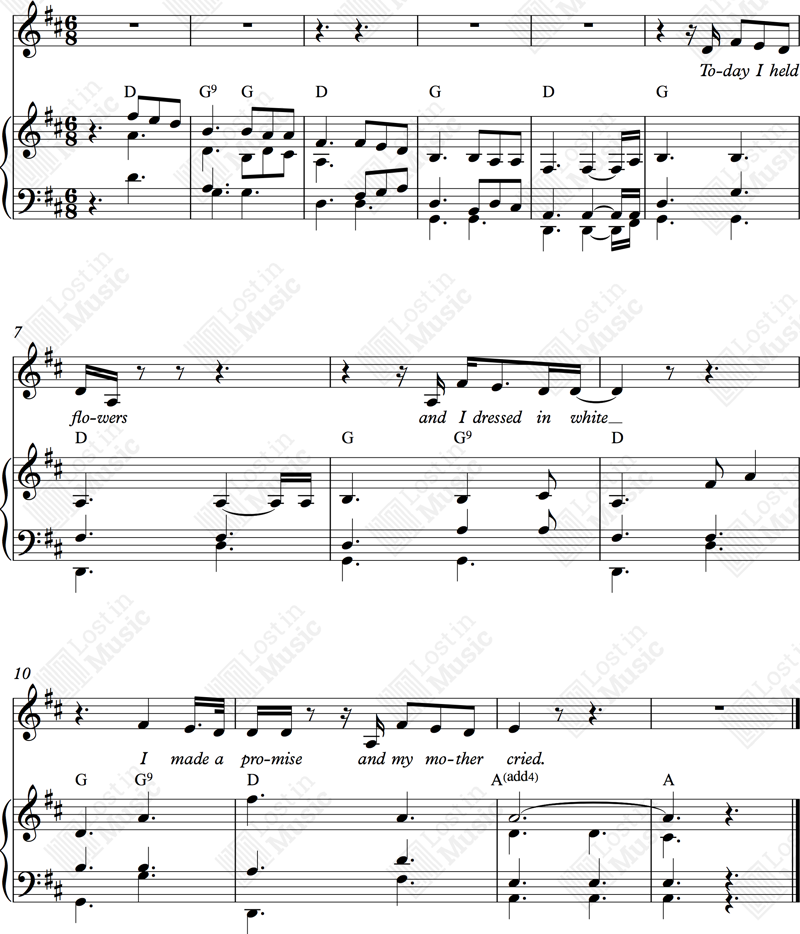 The Rest Of Our Life 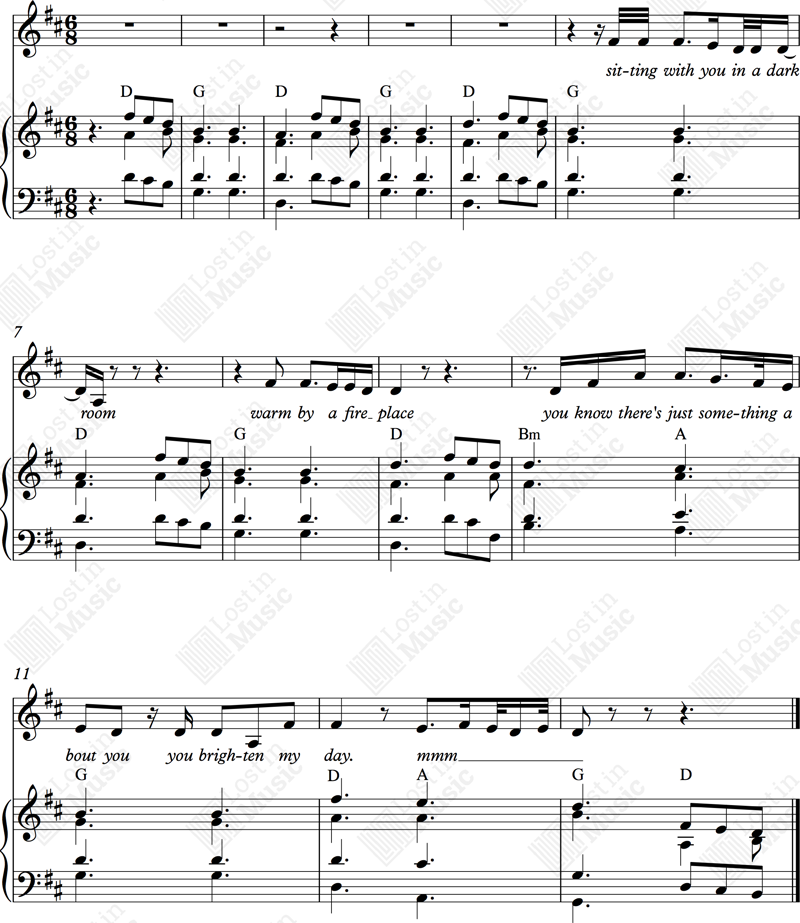 Although there are clearly identical phrases common to both songs, it will be up to the publishers of The Rest Of Our Lives to demonstrate that these phrases are musical commonplace and therefore uncopyrightable. They can do this by providing examples of similar phrases in earlier songs or instrumental music.

It is hard to argue that access to the original song would not have been possible, and it is possible therefore that subconscious copying of the opening could have taken place.

The Independent article on the case from 16 January 2018.

Musicfeeds.com Australia article from 12 January 2018 including a window to the court papers.

Downloadable pdf of the court papers.

How can I finde the music score for this song?Jasmine Rae - When I Found You

I need the music sheet for this song. Please help me. I really 👍 and I want to play it on the violin.