In 2014 the New Zealand National Party ran a TV advertising campaign for the election that year, using a track called Eminem Esque, licensed from a production music library. The ad aired several times in August 2014 and after media commentary suggesting similarities with Eminem's song Lose Yourself, the party replaced the music in the ad.

This case has provided a feast of detail in the form of two documents from the New Zealand courts.

Lose Yourself was written in 2002 and released by the artist Eminem in 2003. Eminem Esque was written by US composer Michael Cohen and licensed to US production music library Labrador Entertainment in 2008, who in turn licensed it to Beatbox Music in Australia for licensing in Australasia.

The agency who were preparing the advertising campaign for The National Party used Eminem's track Lose Yourself as what is called a 'temp track' during the development stage of the commercial, intending it to be replaced in due course. When the time came to source audio tracks for licensing, Eminem Esque was proposed. The National Party were alerted to the similarity in style with Eminem, and to the fact that Eminem had been accused of using "hate speech". They sought reassurance from the Australian publisher of the track, among others, that the track was free of infringing material, and were given this by Beatbox.

After the advertisement had aired over 100 times, suggestions surfaced in the media that the track sounded like Lose Yourself.

The case was divided into two parts - the first to determine whether the National Party was liable for copyright infringement, and if so, the extent of the damages payable. The second part (yet to be heard) will consider whether there is any third party liability (such as the composer, publishers and licensors of Eminem Esque respectively).

The court quickly agreed that copyright existed in the original work Lose Yourself, and that Eight Mile Style were the rightful owners in New Zealand and able to bring the action. The court then had to consider whether copying of Lose Yourself had taken place by the defendant.

The full 132-page case document is available here, and the New Zealand courts also made available a six-page "media release" - a summary of the case prepared for the media to aid understanding of the court decision, available here.

The case concerned only the musical elements of Lose Yourself, and not the lyrics.

The National Party maintained that there was not any copyright infringement because they had licensed the use of Eminem Esque in the advertisement; that they did not reproduce or copy Lose Yourself and that not every aspect of Lose Yourself was original - a number of aspects of the song were borrowed.

The National Party's musicologist, Dr Zemke, illustrated how main structural elements of pop songs, such as drum beats, timbres and chord sequences, were actually similar "building blocks" upon which a number of songs were developed, citing the striking similarities between early rock 'n' roll songs of the late 1950s, and illustrating the point with The Beatles' Sgt Pepper album of 1967, which drew on a host of pre-existing musical styles as the starting point for many of its classic songs.

Zemke also highlighted the influences that Eminem drew on in writing his songs, such as Masta Ace, and referencing a similar chord sequence in Lose Yourself and the earlier Led Zeppelin song Kashmir, though this similarity was disputed by the claimant's musicologist as well as the co-writer of Lose Yourself, Jeff Bass.

You can view the TV commercial here.

The claimants also prepared two audio examples as "comparative tracks" for the court. The first http://www2.justice.govt.nz/website-documents/judicial/lose-yourself-eminem-esque-sequential1.mp3 is "a sequential playing of an excerpt of Lose Yourself, which has a duration of 56 seconds, followed by an excerpt of Eminem Esque. Eminem Esque then starts at 57 seconds".

The second http://www2.justice.govt.nz/website-documents/judicial/lose-yourself-eminem-esque-overlay.mp3 is called an "overlay track. This track has Lose Yourself and Eminem Esque overlayed, allowing both tracks to be heard together. Each of those tracks can be heard separately by Lose Yourself being channelled through a left headphone or speaker and Eminem Esque played through the right headphone or speaker".

(Bass/Mathers/Resto) © Eight Mile Style/Kobalt Music Publishing Ltd. Recording by Eminem, Ⓟ 2002 Interscope Records/Shady Records. Note that the original track has been edited here to match the edits of the version used in the TV commercial. 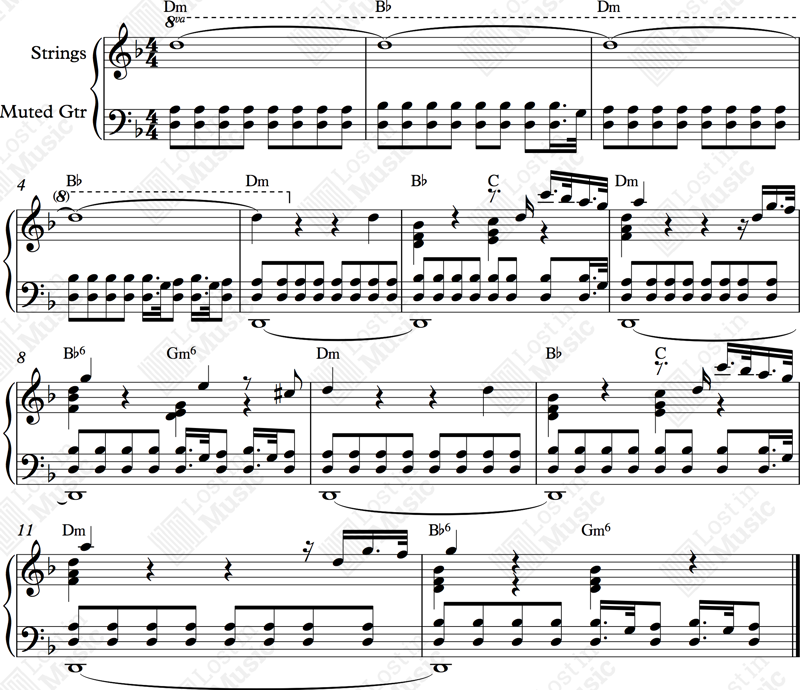 (Cohen) © Michael Cohen. Recording by Michael Cohen, Ⓟ 2008, Labrador Entertainment Inc. Note that the original track has been edited to match the edits of the version used in the TV commercial.

In order to prove infringement had taken place, Eight Mile Style had to demonstrate that the defendants had

A causal connection between the two tracks was found to exist by the courts.

In terms of copyright infringement, the National Party was found to have carried out the following restricted acts:

The judge drew on many pieces of evidence to conclude that a reasonable notional licence fee for use of the Eminem track Lose Yourself in the commercial was NZ$600,000, and this amount was awarded in damages against the National Party for copyright infringement. The National Party had paid $4,802 to license Eminem Esque. Three years' interest at 5% took the award up a further NZ$95,000. NZ$7,500 was added reflecting the fact that infringement was "deliberate, calculated, done for commercial advantage", but the judge took into account the fact that the National Party used the track on "professional, commercial and media advice" that it did not infringe copyright. They were not "reckless or contumelious of the rights of the copyright owner", and therefore no additional damages were awarded.

A subsequent hearing would determine responsibility for the fee among the third parties, such as the composer of Eminem Esque and its original publisher.

October 2017 press release from AMCOS, the Australian collection society that licensed the use of Eminem Esque