Claimant Work: I Won't Back Down

Defendant Work: Stay With Me

It was reported in January 2015 that the publishers of Sam Smith's hit Stay With Me had agreed a 25% share of royalties to Tom Petty, Jeff Lynne and their publishers on account of its similarity to Tom Petty's 1989 single I Won't Back Down. The case was unusual in being disclosed to the press and revealing the settlement amount.

The Sun quoted a source as saying, “after it was pointed out to Sam’s camp, they didn’t try to fight it and amicably dished out the royalties."

The Guardian quoted Tom Petty as saying, “all my years of songwriting have shown me these things can happen. Most times you catch it before it gets out the studio door, but in this case it got by. Sam’s people were very understanding of our predicament and we easily came to an agreement. The word lawsuit was never even said and was never my intention. And no more was to be said about it. How it got out to the press is beyond Sam or myself. Sam did the right thing and I have thought no more about this. A musical accident, no more no less. In these times we live in this is hardly news. I wish Sam all the best for his ongoing career. Peace and love to all.”

The strongest argument for infringement must come from the first two phrases of the chorus of each song, lasting in both cases for four bars. These are shown on the first line of each song on the 'Musical Evidence' tab, and when I Won't Back Down is transposed (as here) from G major to C major, the similarity can be seen on the page. Stay With Me has an extra quaver note on the word "oh", but aside from that the notes and rhythms are identical, save for some decorative ad-libbing with the vocal performances (the D# on "down" from Tom Petty and the E-D slide on "me" from Sam Smith).

A significant point of similarity is the crotchet rest in both songs at the start of the second and fourth bars (before the word "won't" in Tom Petty and the words "stay" and "all" in Sam Smith. These rests introduce syncopation by moving the note from the strong first beat of the bar to the weak second beat.

The third phrase of both songs has less in common melody-wise, but both phrases are longer than the preceding two, and the chorus ends with a shorter fourth phrase.

Both choruses have an almost identical range - six notes (C-A when transposed) in I Won't Back Down, and seven (C-B) in Stay With Me.

The feel of the songs is quite different, with Tom Petty at a steady 114 bpm and Sam Smith a gospel/blues ballad at 85 bpm.

The keys are five tones apart, with Petty in G major and Smith in C.

The chord structure has differences. When transposed Petty has Am G C, Am G C, whilst Smith moves from Am to F then C, Am F C. In the third line Petty's harmony moves towards the subdominant chord of F major ("gates of hell") before returning to C major for the last phrase, whilst Smith concludes each of the four phrases in C major.

Whilst the notes do have some similarities, they can be said to be fairly standard melodic shapes for the genre, using much commonplace material.

It is easy to see and hear the similar shapes of the melodies to both songs. Notable visual and audible similarities include the rest on the first beat of bars 2, 4 and 8, creating syncopation.

Syncopation is a common feature throughout both songs with the last word of each phrase anticipating the strong beat of the bar (see the setting of the word "down" in the Petty song and words "me" and "need" in Smith).

The third phrase in both songs is different from the other three in being extended (bars 5-7).

I Won't Back Down 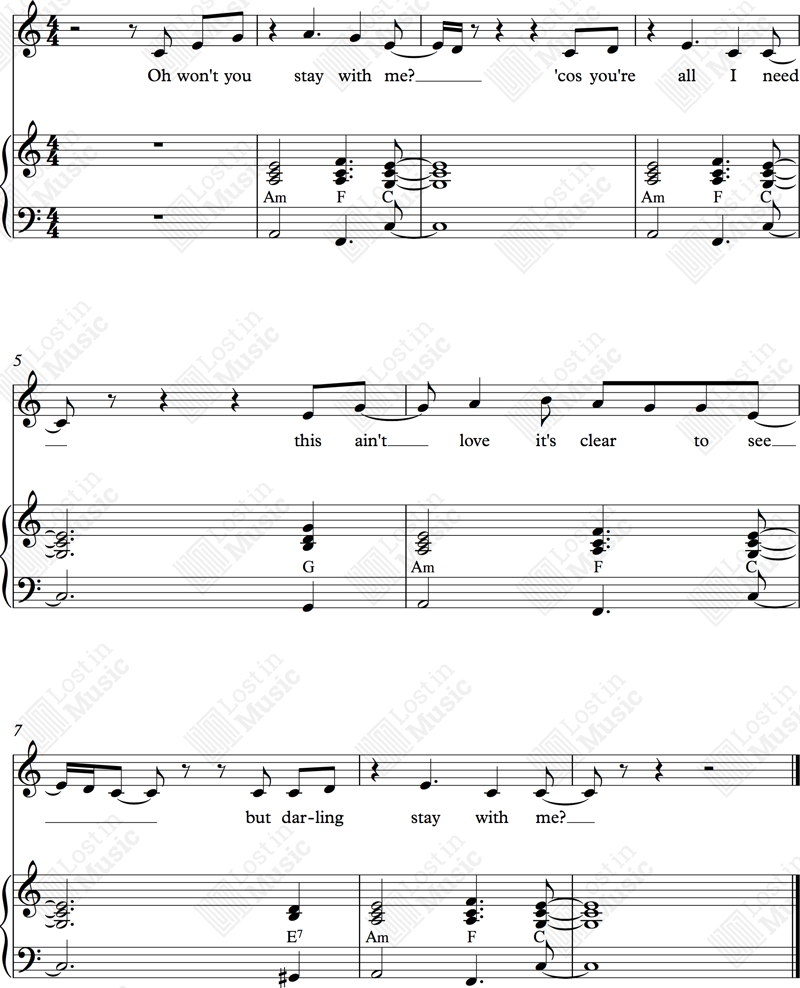 This must have been a close decision to settle, and it would have been interesting to hear a court's reading of the similarities.

One would expect musicologists for the defence to comb the musical archives to find similar shaped musical phrases which pre-dated Tom Petty's 1989 song.

Access may not necessarily be proved, as Sam Smith was not born when I Won't Back Down was released. It could be a case of subconscious copying, but equally it could be coincidence.