The most recent copyright infringement case to come to trial in the UK is also the most baffling. The composer Elizabeth Coffey wrote a song called Forever After between 1995 and 1996. It was recorded and released by a musician called Peter Twomey. She alleged that the copyright in her song was infringed by a track released by Madonna called Nothing Really Matters (co-written with Patrick Leonard and released on her 1998 album Ray Of Light.) The defendants were the publishers responsible for each writer, and the record label.

Coffey made an initial written complaint of infringement of both musical and literary copyright in January 2000, but the claim took several years to reach court, during which time it was amended.

The final claim elaborated on exactly what was implied by the terms used, though these were in no way clear to understand. Coffey’s term “voice expression” implied vocal timbre, “pitch contour” implied the “general shape of the pitches to which the words does it really matter are sung” (as distinct from the actual notes themselves), and “syncopation” implied the “unusual rhythmic and durational stress” of the words as they are performed in the chorus.

Coffey alleged, quite unusually, that the copyright in her work “consisted of a combination of vocal expression, pitch contour and syncopation of or around the words does it really matter. . .” but that this copyright “did not extend to the melody surrounding the words”.

The defendants responded that the claimant was picking certain elements from her song and that the whole musical work should be considered in an infringement claim. They denied that any copying had taken place, and requested that the claim be struck out, or that summary judgement be made. The claimant said that, if this were found to be the case, she would maintain her claim based on certain elements of her work, and not the entire work.

The score transcriptions reveal no evident similarity in any aspect of the music or lyrics. 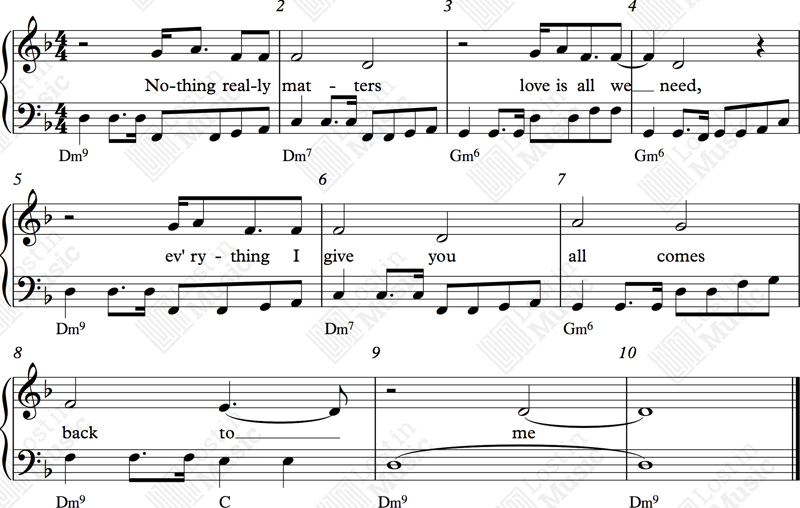 The trial judge, Mr Justice Blackburne observed that the “quite elusive” features described by Coffey related more to the performance and interpretation of the composition than the original work itself, and therefore were “not the legitimate subject of copyright protection in the case of a musical work”. He felt it likely that the three elements in question would not be found to constitute a substantial part of Forever After.

Blackburne quoted Mr Justice Laddie in IPC Media Ltd v Highbury-Leisure Publishing Ltd (2004) as saying that “in copyright cases, chipping away and ignoring all the bits which are undoubtedly not copies may result in the creation of an illusion of copying in what is left”.

Blackburne dismissed the case, stating that “it was not open to a claimant to pick and choose the elements of a work upon which he relied” to make a case more likely to be decided in his favour. Exactly what consititued the copyright work was always a matter for the court to decide, and not for the claimant. The claim could therefore not succeed and was dismissed. As a consequence, no consideration was given to the degree of similarity between the two works, nor was expert opinion sought.

This quite bizarre case makes one wonder what kind of legal advice the claimant had to believe there was any chance of victory here. There was no precedent in case law to suggest that anything with such a vague relationship to an allegedly infringing work could have a chance of success.