Malmstedt vs EMI Records and Per Gessle

Claimant Work: Jenny And I

Defendant Work: Sleeping In My Car

Swedish composer Stephan Malmstedt brought an action against EMI Records in 2002 after hearing Roxette’s song Sleeping In My Car, which he considered infringed the copyright in his own song Jenny and I. The song Sleeping In My Car was the first single from Roxette’s 1994 album Crash! Boom! Bang! Both the album and single were hits across Europe, the album and single reaching number one in the charts in Sweden, and the album number three in the UK.

The second defendant, Per Gessle, was the composer of the allegedly infringing song, and one half of Swedish duo Roxette, who enjoyed significant international success from 1987 until the late 1990s. Malmstedt had sent a demo tape of his song to music industry contacts who worked with EMI and Gessle. Sleeping In My Car was written in 1993 and released in April 1994.

Malmstedt enjoyed modest success as a recording artist in Sweden in the 1980s. He had an album released in Sweden by EMI in 1983, and had a recording and publishing deal with EMI Sweden at that time. Jenny and I was written in or before 1991 and recorded as a demo in London. He sent a copy of the demo to Kjell Andersson, head of A&R at EMI Sweden, and gave a copy to Niklas Stromstedt, who had good contacts in the industry. In March 1994 he heard Roxette’s recording Sleeping In My Car and concluded that the chorus had been copied from his song.

Malmstedt was a member of the Swedish performing right society STIM, and initially approached them with a complaint of plagiarism. STIM, like PRS in the UK, has the power to freeze royalties on any works that are the subject of an ownership dispute. Unlike PRS, STIM also considers any infringement claims and offers an opinion to the parties, though has no power over legal decisions relating to copyright ownership. STIM accepted that there were similarities between the works, but concluded that they were common in this style of music, and subsequently did not agree to freeze royalty payments to EMI and Gessle.

Malmstedt next went to the police in Sweden with a criminal complaint, as he was unable to meet the costs of a law suit. The police sought an expert opinion from Stockholm University, who concluded similarly to STIM that some similarities existed, but were not significant enough to constitute an infringement of copyright. Undeterred, Malmstedt approached a Swedish musicologist at Gothenberg University who felt that there was a case for infringement, and wrote a letter to that effect.

Malmstedt returned to the UK and brought proceedings requesting an injunction and damages, which failed in July 2001. At the appeal it was ordered that a single expert be appointed to give an impartial opinion, as the claimant could not afford an independent musical expert. Mr Guy Protheroe was instructed, and he was asked to comment on the report already submitted by the defendants, prepared by Mr Peter Oxendale. Protheroe and Oxendale both agreed with the initial STIM report that any similarities between the works were commonplace in this style of music.

The claimant gave his own written and oral expert evidence. As Malmstedt could not prove that Gessle had heard his song, the only way his case could succeed would be if he could show similarities between the two works that were so striking there was no possibility of their being coincidental. In the judge’s words, “such a degree of similarity is certainly not apparent . . . from hearing them”. Malmstedt’s key claims were that:

Yet some of his claims were so far-fetched as to ridicule his testimony and call into question his reliability. He suggested that four out of the five notes of the chorus of Sleeping In My Car were the same as the harmony vocal of Jenny and I, “although in reverse order, with one note added”, calling this a case of “backwards stealing”.

Composer Per Gessle maintained he had never heard Jenny and I before he wrote Sleeping In My Car. EMI’s A&R head gave evidence that he did not play Jenny and I to Gessle, as it would be “unethical” to do so without the permission of Malmstedt. He also advanced the persuasive argument that Gessle wrote his own songs, and therefore would have no interest in recording the music of other writers. The judge raised concern over the claimant’s ability to give an opinion that was objective, in providing his own testimony. The independent expert’s report concluded that:

Mr Protheroe went on to confirm that he agreed with Mr Oxendale’s conclusion that there were not sufficient grounds “to sustain the claim for infringement of the copyright”.

Visually there is some similarity between the two songs. The first five phrases of both start half way through the bar, on the third beat. The second and fourth phrases ("no victims"/"I will impress you", and "no heartache"/"I will caress you") begin on the same note of the scale when transposed.

The title of the song is repeated several times throughout the chorus, with Jenny and I having five occurrences and Sleeping in my Car four.

We are grateful to The Music Copyright Information Resource for making an audio recording of Jenny and I available. 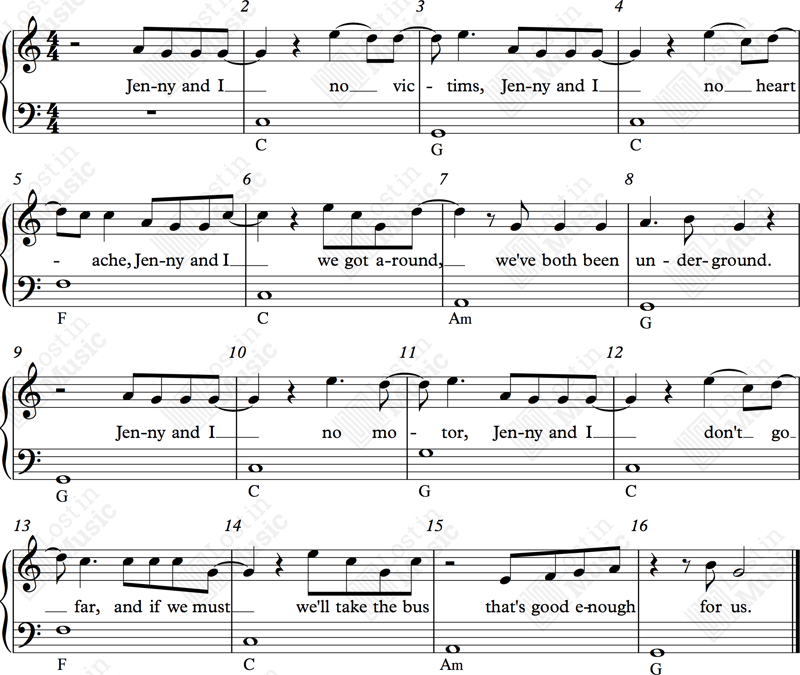 Sleeping In My Car

In concluding, the judge said that there was “credible evidence that the second defendant did not copy the claimant’s work . . . and . . . that such similarities as there are could perfectly well be coincidental”. He also concluded that he did not consider what was alleged to have been copied as substantial, and that it was “quantitatively not great, nor qualitatively not great originality.”

As with previous UK infringement cases, this one failed because proof of copying could not be established, and any similarities were agreed to be commonplace. Jenny and I is musically and lyrically a song of some quality, but is not strikingly original. It has the flavour of songs from the ‘new wave’ era of the late 1970s, by artists such as Elvis Costello (Radio, Radio), Nick Lowe (Cruel To Be Kind) and Dave Edmunds (Girls Talk, Queen Of Hearts).

The case begs several questions. What drives composers such as Malmstedt in their quest for what they regard as justice, bearing in mind the financial risks of a trial? What causes Malmstedt to disregard the opinions of STIM and the Swedish police and pursue the case further? Is he motivated by envy of Roxette’s success, or the potential ‘jackpot’ of a royalty settlement? As a musician himself, is he unable to view the comparison with the Roxette song objectively? And, perhaps the biggest question – how could Malmstedt’s legal advisers realistically expect success, particularly with the precedents of earlier failed cases such as FDH, EMI and Warner v Dundas?