Burruss, Cottle and Briggs vs Sheeran, Mac and McDaid

Although no legal action was ever reported in this case, news stories began to surface in January 2017 observing a similarity between the chorus of Ed Sheeran's single Shape Of You with TLC's 1999 hit No Scrubs, a UK number three and US number one. In March it was reported that the Ed Sheeran song now showed a writer share for the three TLC songwriters.

There is very little information about this case in the public domain, other than references on social media from early January 2017 noting a similarity between the two songs, and press reports in March 2017 noting that the TLC writers had been added to the songwriter credits on Shape Of You.

Clearly they were persuaded that there was an element of No Scrubs in Shape Of You to concede to a royalty share for the writers and publishers of that song. It is possible that a cash payment formed part of the settlement, though as with almost all cases, the settlement terms remain confidential.

The argument for an infringement of No Scrubs by Shape Of You would have focused on the chorus, where there can be said to be a similarity in the rhythm, though not the melody, of the notes.

The choruses are both a standard eight bars in length, and repeat the first four bars in the second four bars. Chords change twice each bar on the first and third beats. There is no real use of syncopation in either chorus.

The first phrase of each chorus has an identical rhythm and the pace is steady, using only the quaver note. The second phrase of both becomes busier introducing semiquavers, and both phrases end on the first beat of the third bar. Thereafter the rhythms become less similar.

Many elements of the chorus of both songs differ.

The keys are not identical. Both are minor, but No Scrubs is in G# minor, and Shape Of You is in A minor, just one semitone higher.

The chords are not identical. If we transpose No Scrubs up a semitone into A minor to aid comparison, the chords of each are:

Significantly here No Scrubs only uses three chords in the chorus, and the tonic (or root) chord is the second, weaker chord of the chorus, occurring each time on the third beat, rather than the first beat of the bar. Shape Of You uses four chords in its chorus, and the tonic chord occurs on the first strong beat of the bar each time. Both choruses only have two chords in common: the tonic chord of A minor and the sixth chord of F major, and perhaps it is this coincidence that subconsciously links the two songs. In pop music the tonic chord of A minor is more usually juxtaposed with E major (the dominant chord) and D minor (the sub-dominant chord).

Melodically the two choruses are miles apart. No Scrubs employs just four different notes (one of which occurs just once in each four bar section). Almost the entire chorus centres around the notes C, D and E, being the third, fourth and fifth notes of the A minor scale. The melody of the chorus of Shape Of You is more expansive and uses nine different musical notes, spanning one and a half octaves or eleven notes, from a tenor G to a treble C.

The accompaniment to Shape Of You is sparse, and relies on a repeated 'looped' two-bar figure with a xylophone-like sound. This figure uses a syncopated rhythm by which the second and fourth beats of each bar are anticipated by a quaver. The accompaniment to the chorus of No Scrubs consists of alternating long and short chords, of two beats (minim) and half a beat (quaver) in duration. These chords are played on the beat and do not use syncopation. The different rhythmic treatment of the harmonies in the choruses of the two songs create a very different feel. 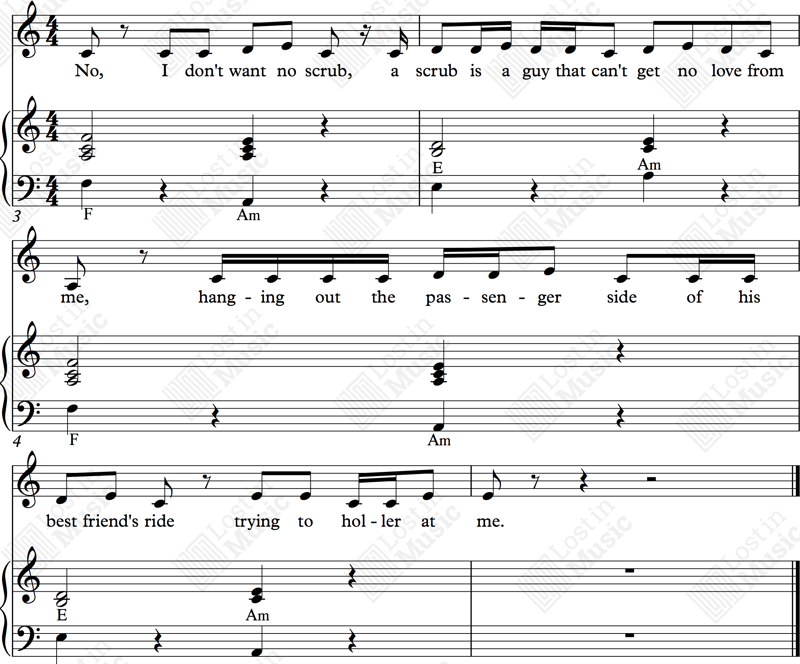 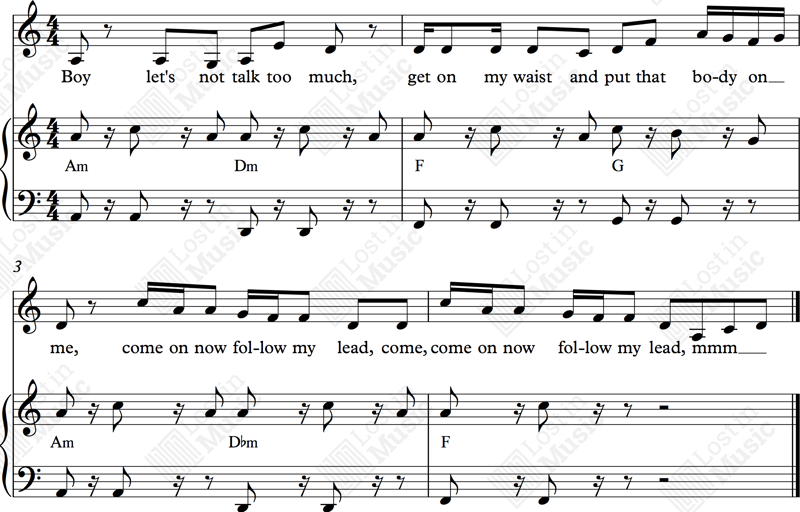 As with virtually all settled cases, the terms of the settlement remain confidential, though the publicly available databases of US performing rights organisations ASCAP and BMI show the TLC writers and publishers as receiving a royalty share.

Weighing up the instances of similarity and difference in the two choruses it is surprising that the publishers of Shape Of You agreed to a share in songwriter royalties with No Scrubs. Perhaps they had been persuaded by the high-profile settlement of Tom Petty and Sam Smith and the ruling of the Blurred Lines case that a settlement might be advisable. Perhaps the writers of Shape Of You were happy to settle rather than risk an expensive high-profile trial.

But with each settlement like this, where the likelihood that an infringement has taken place is low or at least questionable, the pendulum swings closer towards infringement for countless other lower-profile cases.

There is certainly a rhythmic similarity. However, I think it is a stretch to suggest that Sheeran heard 'No Scrubs' and thought 'I'm having that'. And if this does constitute infringement, there are certainly scores of other artists who should be sleeping very uncomfortably right now.