Estate of Ed Townsend vs Sheeran and others

Claimant Work: Let's Get It On

A case was brought in 2016 against Ed Sheeran, his publisher and record label, for allegedly copying Marvin Gaye classic Let's Get It On in his song Thinking Out Loud.

Ed Townsend was the co-writer with Marvin Gaye of the 1973 classic Let's Get It On. He died in 2003, and his estate brought an action against Ed Sheeran in 2016 for copying without permission the song Let's Get It On in his song Thinking Out Loud, which was recorded and released in 2014. According to the Digital Music News report in July 2016 the first case failed, as papers were not correctly served on Sheeran and the other 14 defendants, including his publisher Sony/ATV Music Publishing LLC and record labels Sony/ATV Music Publishing LLC, Asylum Records and Atlantic Records, with only two papers having been correctly being served. The judge dismissed that case in November 2016.

The Hollywood Reporter stated in June 2018 that a further claim followed from a company called Structured Asset Sales, which claims to own part of Townsend's interest in the song, and sues Sheeran for $100m.

Sheeran filed a request to dismiss the lawsuit, but this was rejected on 3 January 2019 by a US District Court judge. As reported in Billboard Judge Stanton stated that there were enough similarities between the two songs to prevent "a judgement of noninfringement as a matter of law". He continues "although the two compositions are not identical, an average lay observer could conclude that parts of [Thinking Out Loud] were appropriated from [Let's Get It On]".

US music webzine Spin also quotes the judge as noting that jurors "may be impressed by footage of a Sheeran performance which shows him seamlessly transitioning between [both songs]", and includes a link to that footage.

The chord sequence and rhythmic pattern are very similar throughout both songs, featuring a repeating one bar loop of the keys I, iii, IV, V7. This is what causes them to sound similar. The second and fourth chords of the loop are syncopated, anticipating the next bar by a quaver each time.

Both songs feature expressions of love in the story, although there is no direct relationship between the lyrics.

For those unfamiliar, it's worth explaining briefly here the numeralisation of chords. This is a system which enables us easily to compare the harmonic structure of songs, regardless of their root key. The eight notes of a scale each has a Roman numeral corresponding to the number of the note. An upper case numeral (I, II, III, IV) indicates a major chord, and a lower case (i, ii, iii, iv) minor. This enables all the chords to be expressed simply. Thus the chord sequence in this case (I, iii, IV, V7) is the major chord of the first note, the minor chord of the third note, the major chord of the fourth note and the major chord of the fifth note. Where a decimal number is added this corresponds to the number of the note in the respective scale that is added. V7 indicates that the seventh note of the scale is added to the fifth chord. Decimal numbers variously add colour, emotion and momentum to basic chords. In C major this sequence would represent the chords C, E minor, F, G7, and the 7 added to G indicates the additional note F). Wikipedia has an excellent article with more detail if helpful.

Let's Get It On is a beautifully laid-back soul track, with warm instrumentation including sax, strings, piano, guitars, and rich harmony backing vocals, underpinned by an ad lib funk bass line and tight drums.

By contrast the production on Thinking Out Loud is sparse. Piano, bass and light chorus guitar provide the backing to the solo Sheeran vocal, with light harmony vocals joining in the second verse as the track gradually builds. An electric guitar solo picks up at 3.26. The final chorus, at 3.50, is fuller, with backing choir and Hammond organ.

Although the chord patterns in both are very close, there is a subtle but significant difference in the second chord of the loop. Comparing both in the key of D, Gaye moves from D major to F# minor for the second chord (from bottom to top F#, A, C#) - Sheeran from a D major root chord to a first inversion chord of D major (F#, A, D).

The I iii IV V chord progression and its rhythmic shifts occur frequently in music of the genre, Freddie Jackson's 1985 hit Rock Me Tonight, being a good example, though using the related chords I iii7 ii9 IV/V.

The songs are in different keys - Sheeran in D major, and Gaye up a semitone in Eb major. The tempo of Thinking Out Loud is slightly slower.

They differ structurally. After the first verse (48 seconds in) Sheeran veers off into a 'bridge' of eight bars introducing the new key of E minor. There is a 'coda' figure at 1.37 in Sheeran's song, again taking the music away from the looped chord sequence.

The bridge in Let's Get It On occurrs at 1.34, and the music pauses for two bars on Ab major, the subdominant key. This alternates with the one-bar loop four times over a period of 45 seconds before returning to the loop. Gaye repeats the bridge section at 3.05.

Crucially there is no coincidence between either melody or lyrics. The strongest arguments for plagiarism centre around these elements of a song.

TMZ reported in June 2018 that Sheeran made some counter-claims "according to new docs":

More detail on this final claim is provided by a Hollywood Reporter article here.

Reuters reports the defence arguing that the mood of Thinking Out Loud exhibits "somber, melancholic tones, addressing long lasting romantic love" while Let's Get It On is a "sexual anthem" with positive emotions.

Let's Get It On 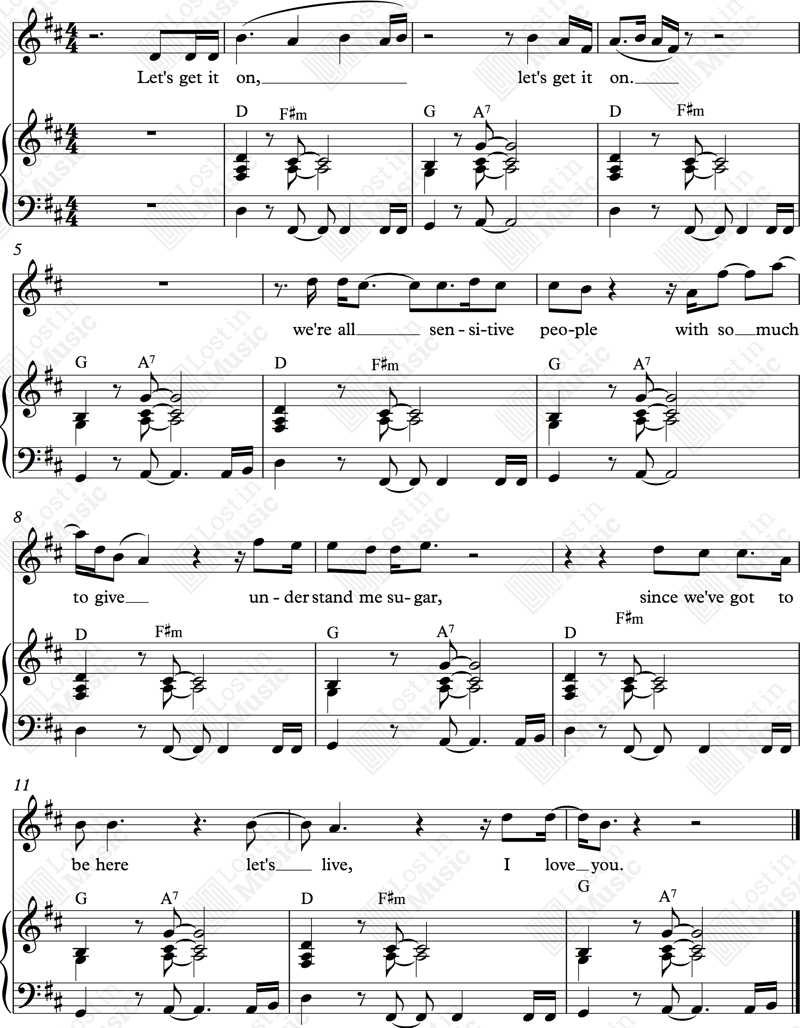 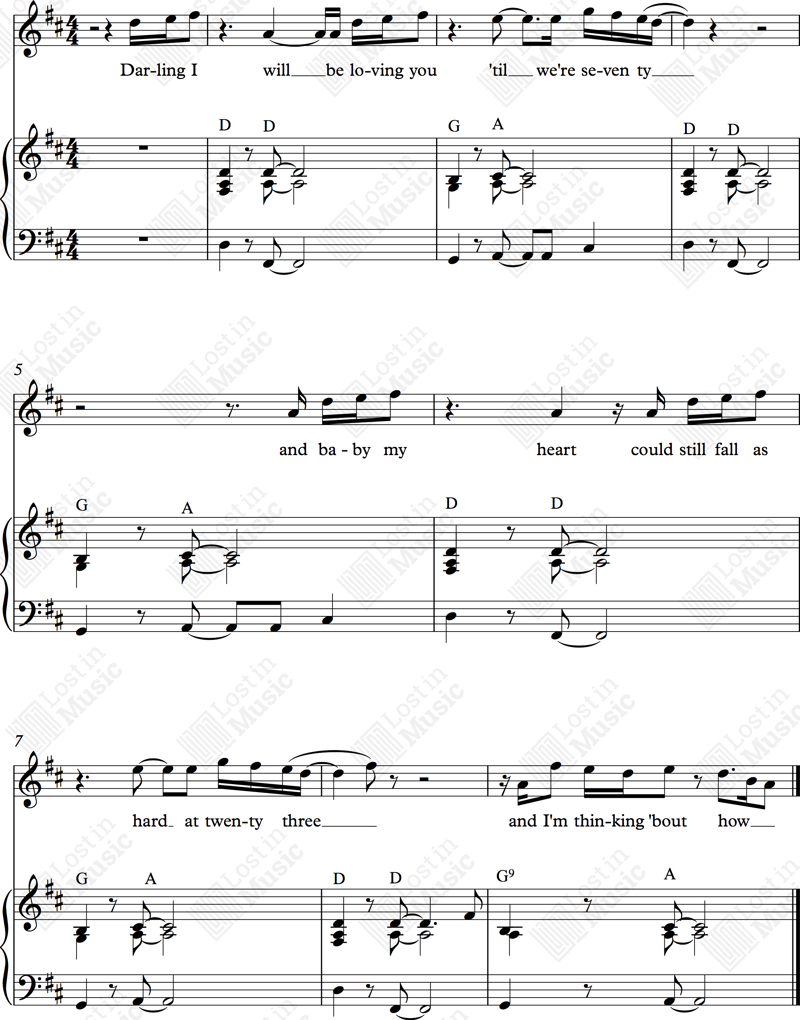 A key difference between this and the Marvin Gaye/Blurred Lines case is that here there can be no real claim that Ed Sheeran has copied the style of Let's Get It On. The chord pattern and rhythm alone do not constitute a style, and indeed have been recreated many times since 1973.

As there is no melody and lyric similarity, the decision must turn on whether the chord sequence and rhythm alone is copyrightable.

Let's Get It On Wikipedia

Billboard report, 28 June 2018 looking at the validity of the claims from the Gaye and Townsend estates

I don't think a chord progression - particularly one in as standard a time signature and tempo as in this example - can be 'owned' by any one artist. Sheeran's melody and rhythm is completely different to Marvin Gaye's, as is the rest of the song. Similar, yes, but no case for infringement for me.

This is SO ridiculous! "The heirs of Let's Get It On's late co-writer Ed Townsend, claim Sheeran's track off his 2014 album X, copies "the melody, rhythms, harmonies, drums, bass line, backing chorus, tempo, syncopation and looping"" [https://www.bbc.com/news/entertainment-arts-48852135]. No, it doesn't! The melody and the chords are different, and that is all it should be based on. If it is going to be determined that drum grooves, tempos, syncopation, harmonies, rhythms are to be deemed copyright-able, I claim right now all tempos, including all incrementations no matter how slight, with 95 bpm-105 bpm are MINE. I also want the swinging rock n roll power chord riff to be mine, too. ALSO, I claim all harmonies of a major 3rd or a minor 3rd; that's all mine now. Okay? Are we all in agreement?